A number of familiar faces will be rejoining the first-team after signing Academy contracts with the squad during the 2018 season, including goalkeeper Patrick Schulte and defender Lawson Redmon.

Schulte joined the club at 7 years-old and has committed to play collegiately at Saint Louis University in the fall.  He is a strong shot-stopper and commands the box very well.  Redmon has been part of the club since he was 10 years-old after moving from community-based club Glen Ed where he started playing at 7 years-old. He is an attack-minded left-back with a good range of mobility and is solid in one-on-one situations.

“I’m very grateful for this opportunity,” said Schulte. “I’m looking forward to developing more as a player and to help the team in any way that I can.”

“I am very thankful to have the opportunity to represent my hometown club,” said Redmon. “I look forward to helping the team and contributing in whatever way I can this year.”

Vlastos has been training with the first-team since the 2017 season after joining the club at 15 years-old from Casper, Wyoming.  He is a creative, attacking central midfielder who is very dangerous off the dribble.

“I would like to thank the staff, from both the first team and Academy, for giving me this opportunity,” said Vlastos. “Also, thanks to my Mom, Dad and brother for their unmatched support. I am looking forward to continuing my development with such a great club.”

Keller joined the club at 7 years-old and has played continuously except for one season spent at Clube Atlético Paranaense in Brazil.  He is committed to Saint Louis University in the fall and is a disciplined, defensive central midfielder who wins the ball well with a good range of passing.

“I’m extremely excited and proud to be part of the first-team,” said Keller. “This opportunity is a culmination of the great support I have received from all of the St. Louis Scott Gallagher and STLFC coaches during my soccer development. My goal with the first-team is to continue to grow as a soccer player and contribute my very best, day-in and day-out. I’m pumped to get started!”

Miller is the youngest Academy player on the roster currently at 16 years-old.  He joined the club at 7 years-old and spent three years playing with Lou Fusz SC before rejoining at 13 years-old.  Miller is a central defender who is strong both in one-on-one duals and in the air.

“I’m very thankful for the opportunity that I have been given,” said Miller. “I’m just super excited to get to work and meet the whole team!”

"We are extremely excited for these young men, all of whom have been in our Academy at least five years and, for most, much longer,” said STLFC Academy Director Blake Decker. “Additionally, we are grateful for the support and belief in the Academy demonstrated by Jeremy [Alumbaugh], Anthony [Pulis], and the club leadership. Over the past four years, we have seen how this step can be a real accelerant for a player’s development and, as the integration between the first-team and the Academy continues to strengthen, we are better able to help our Academy players both prepare for and more successfully make this very difficult transition into the senior game.  This is just one more step in their journey, not an end point. That said, this is a moment to congratulate these young men as well as their families, their coaches, and their teammates who played an integral role in their development over the years."

“We’re delighted to welcome Patrick, Lawson, Kippy, Nichi and Jansen into the first-team squad,” said STLFC Head Coach Anthony Pulis. “It’s fantastic that we can give these boys an avenue like this to help them grow and develop within our club. Ultimately, it is down to them now to earn the right within the first-team environment to get minutes or get named to the 18-man game day roster. I would also like to congratulate Blake Decker, [Academy coach] Luis Swisher, and all the Academy staff for the roles they have played in helping these young players take the next step in their development.” 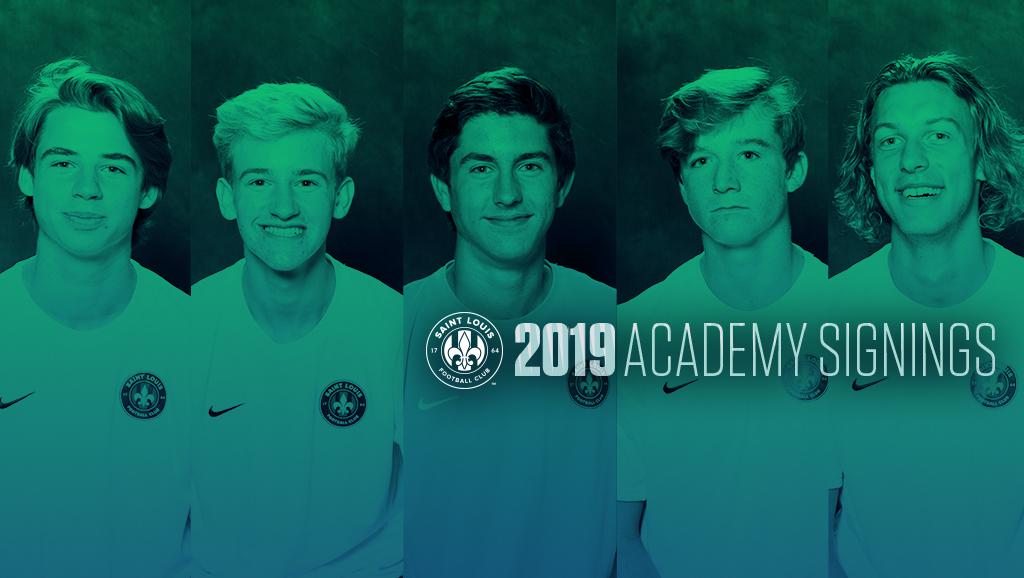